In order for one of our vertical sundials to be properly accurate we need to know the angle that your wall faces. This is known as the angle of declination of the wall. The angle of declination is an angle which is referenced to due south, so a wall may be so many degrees east of south , or so many degrees west of south. Once this angle is known we can make you a nice accurate sundial!!

What we have to do is determine which direction is south. Unfortunately using a compass is not accurate enough. A compass measures magnetic north, which is determined by the earth’s magnetic field , but this is not the same as true (or geographic) north. The location of the magnetic north pole changes slowly over time, so much so that the magnetic north-south line is not always straight up and down on a map!! Instead we must use the passage of the sun as it traverses the sky from east to west to determine our true north-south line.

The method involves plotting the shadow of the sun cast by a vertical pin fixed into a suitable piece of flat wood. By drawing a series of concentric circles on the flat substrate we can trace the motion of the sun as it passes through it's zenith. ( I do this on some paper first then stick the paper onto the flat wooden surface)

The photo below shows the principle idea, although in practice it would be much better to have a thinner pin. This is for illustration only. 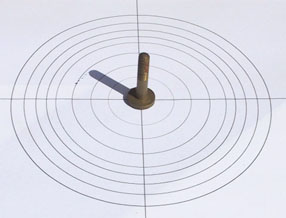 The circles can be say 6, 8 10 and 12 cm in diameter. Place your pin at the locus of these circles. Try a pin about 3 cms high, but you will need to experiment as the length of the shadow we want to measure varies according to the time of year. ( ie it is longer in the winter, when the sun is low, and shorter in the summer when the sun reaches a much greater height,  particularly around noon which is the period we are most interested in )

You need to set up your little experiment near to the wall which you want to place your sundial on . Make sure the wood is perfectly horizontal in both planes and that the pin is perfectly vertical. Now make yourself a coffee ( or something stronger if it’s the weekend!) . With a pencil mark off at intervals the position of the shadow as the sun moves through noon. See the graphic below. If possible try to mark the points as the shadow crosses each of the circles but don’t despair if the sun goes in at the crucial moment ( it normally does!) We can extrapolate by drawing some neat curves when the experiment is over.

The diagram below shows the progress of the sun between 11AM and 1.00 PM.

Note that the curve will have a different shape depending on the time of year. In the winter the curve will be convex towards the pin ( shown) whereas in the summer months the curve will be concave away from the pin. And at the times of the equinoxes the path will be a straight line running due East-West. See the diagram below to get some idea of what to expect.

Now we are ready to determine south!!

Now this is very important. Make sure that your experimental set up has not and cannot move, or else all will be lost. You have been warned!

For each of your circles, draw a straight line joining the two points where the shadow crossed the circle. Now mark the midpoint of each line. Next draw a line through these points.

If you’ve been accurate with your readings and method this should be a straight line. This line is the north - south line. Nearly there...........

Now extend this line back towards your wall. We need to know the angle that it makes with the wall.....see the next graphic

If everything has worked out you have now recorded the blue angle x. The declination of your wall is the red angle d , which is (90 - x). In this case the wall is declining to the west. If the South line passes out of the circles bottom left then the wall would be an east decliner. It would be a mirror image of the above diagram and the wall would then be South dº East.

I have made a little gizzmo which is available for hire!

See the next diagram.

It is comprised of a flat surface with a rotating disc which is used to align the shadow of the sun at solar or true local noon. It is then a simple thing to determine the angle of declination of the wall. It comes with full instructions on what to do.

The device is placed against the wall for which we want to measure the angle of declination, making sure ABCD is level in both horizontal planes.

The disc is rotated so that the shadow falls inside the red lines. As long as this adjustment is made at solar noon we then have our North-South line and the declination of the wall can be easily determined.

The only drawback with this method is that the sun must be shinning at the crucial moment.

I supply you with a table of figures so that you know when your local noon is. It is not when your watch reads 12 o'clock ( or 1.00PM in the summer) . Local or 'solar' noon is a function of your longitude ( a constant) combined with the Equation of Time ( a variable).

Using this tool I took a quick declination reading of our living room window. See next photos.

Place instrument against window at solar noon. The pin is casting a shadow exactly true north 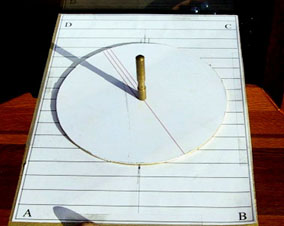 Rotate disc so that the shadow is within the 2 red lines. The single red line opposite is now in a direction true south 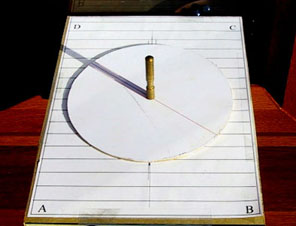 I then made a model sundial out of some plywood and brass using this declination figure, stuck it up in the window and hey presto, it was absolutely spot on! 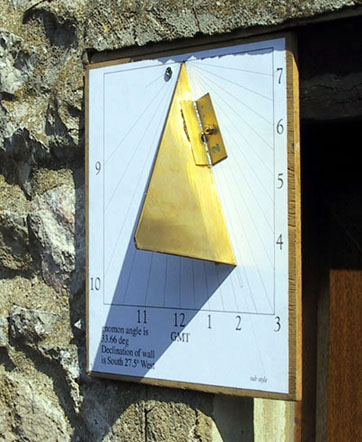 I have to make a charge for supplying this instrument, and the cost is then deducted from the price of your sundial if you go ahead and order.

The cost is £50.00, fully refundable on confirmation of an order and safe return of device.

If you decide not to order a sundial then I will refund the charge less an administrative fee of £15.00 to cover costs.

I am the master of my fate:
I am the captain of my soul

special thanks to TEMPLATED for the HTML5 template